Adenocarcinoma is a malignant condition of the epithelial lining of the airways, most commonly the peripheral airways, and is now the most common type of lung cancer, accounting for 30-40% of all cases.

Structurally, it is characterized by its location in the periphery, and the occasional association with a known scar.  It rarely cavitates but it may calcify. At a histopathological level rosettes of glandular epithelium often with mucus are noted.

It is complicated by early metastasis to local nodes and to distal parts of the body, commonly the pleura, brain, adrenals and bone.

Clinically adenocarcinoma tends to as peripherally placed tumors and hence they are often asymptomatic, but their relationship to the pleura, may incite pleuritic pain or pleural effusion.  Their initial silent nature often precludes early diagnosis and so presentation is relatively late and it is not uncommon for the patient to present with metastatic disease.

The diagnosis is made after endoscopic or CT guided biopsy, and after staging with PET scan or with additional biopsy of remote sites, treatment is initiated based on the staging.

Stage I, II, and IIIA are treated surgically with a hope of cure, and the more advanced stages are treated with combinations of radiotherapy and chemotherapy. 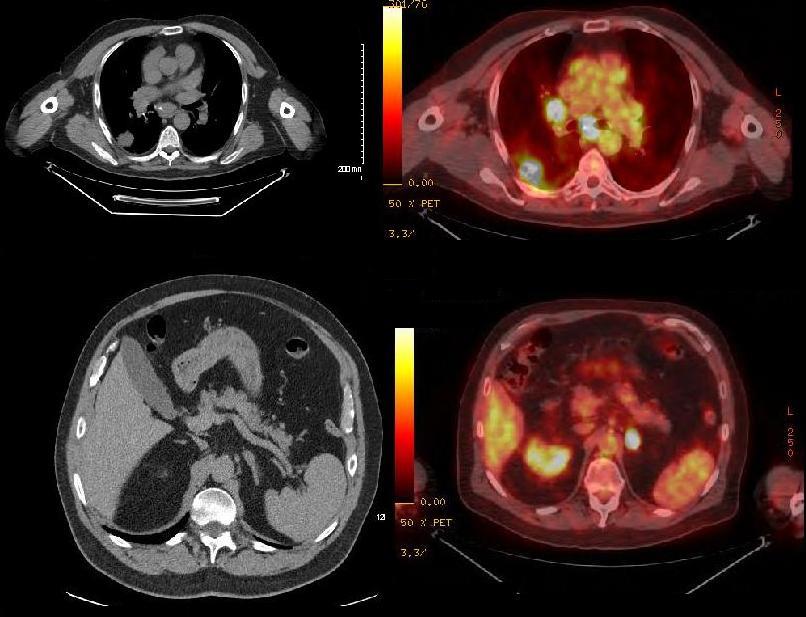